The seat category affects the train ticket price. It is cheaper than most other bus journeys. The category-wise price of the Mirpur to Khoksa train is provided in the below table. You can book a ticket based on your budget.

We hope the journey from Mirpur to the station will be enjoyable. If you want more information, come back to our website again or leave a comment below. 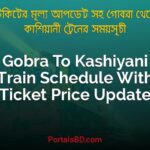